Skip to content
This morning, I was driving up the new bridge on 46 when I saw a black and white duck that had been hit by a car. I realized it was still alive, and I could vaguely sense that its friends were flying around it, just overhead. I passed it, stabbed on the flashers and backed up, hoping that the other drivers would see me in time to prevent total chaos. I just couldn’t leave a fellow traveller to die the death of a hundred cars.

I jumped out of the Mini and threw up the hatch. As I ran back, the other birds circled me. When I got to him, he looked up at me. I saw intense yellow eyes and a black and white stripped head that ended in a hooked beak. No duck: this was a full-grown osprey. I reached down, gloveless, without hesitation, which I think shows that I was suffering from adrenaline poisoning.

He didn’t look frightened or angry; he looked affronted. Such an indignity to be gathered up, legs dangling, and tossed into the back of a tiny car.

I drove on, simultaneously dialing the Birds of Prey Center. He flapped his mighty five foot wingspan and was practically driving the car. I pushed his wing gently out of the way, cajoling him, “Back seat. Back seat!” The leading edge of his wing was soft, feathered in short downlike fronds. After a minute, he settled behind the passenger seat and spent the rest of the 45 minute drive staring at me. He never made a sound, except the soft flap of a wing.

At the center, I opened the passenger door: he was on his back, legs useless, but wings spread threateningly. I folded one wing, then the other, and lifted. He was heavy and warm. Thin blood dripped from his right wing. He bit down on my leather glove. I slipped my hand out so he could hold on to it.

The ladies at the center told me he will not live. Two badly broken legs and internal injuries will take him permanently from the sky and from me.

The reasons for things escape me. 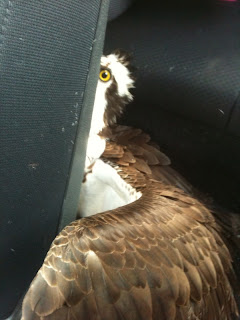