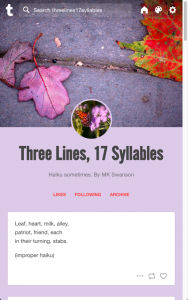 On Tumblr, I have a haiku project called Three Lines, 17 Syllables. At first, I posted every day–usually an image I photographed or created and a haiku, but sometimes just the haiku itself. I exposed it on Facebook, and shortly felt I was asking too much of my friends and family by posting every day, so I decided just to post haiku … sometimes.